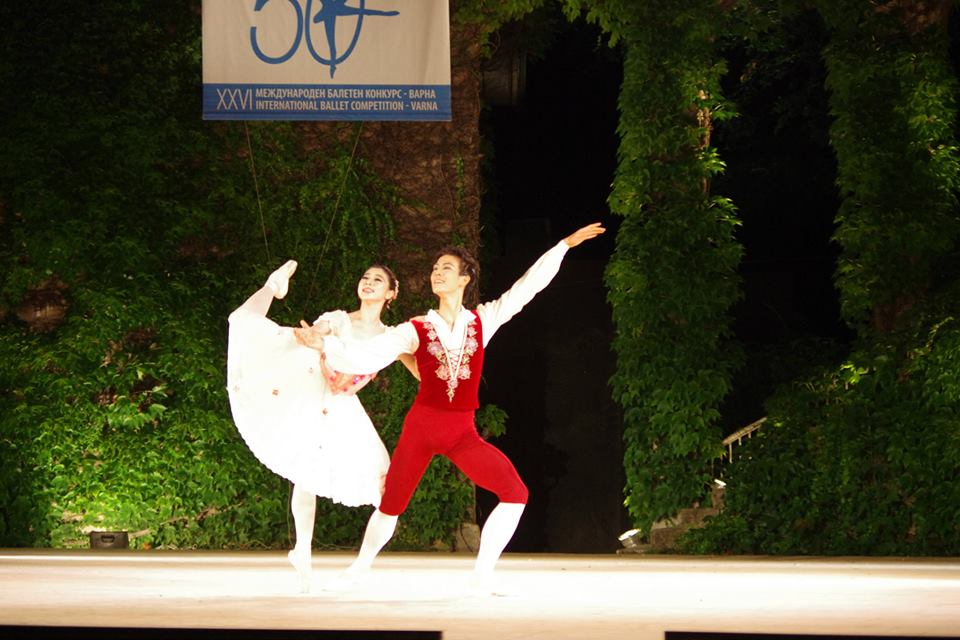 The three tough rounds of the ХХVI International Ballet Competition – Varna 2014 that turned the Summer Theatre in the Bulgarian sea city into a scene of world ballet are over. Today, at a Press Conference in the “Cherno More” Hotel, the International Jury with Chairman Professor Vladimir Vasiliev, Russia, announced the laureates of the competition. Tomorrow night the audience will see them on stage in the Gala Concert.

At the Press Conference, Dimitar Dimitrov, Chairman of the Board of the “International Ballet Competition – Varna” Foundation pointed out, “I am happy to share with you the unanimous feeling of organizers and guests of the fact that this year’s edition of the Competition was truly worthy and measured up to the 50th anniversary of the Competition. In order to make this possible, we, the organizers from the “International Ballet Competition – Varna” Foundation, received the hearty support of our co-organizers from Varna Municipality. During the Competition, we worked together towards a common cause – the candidacy of Varna for European Capital of Culture in 2019. We had the support of the Ministry of Culture of the Republic of Bulgaria, and our patrons in the face of Mrs. Margarita Popova, Vice President of the Republic of Bulgaria, and Mrs. Irina Bokova, Genral Director of the UNESCO contributed greatly to the image of the Competition. We received the decisive support of the sponsors of the Competition. We sincerely thank them! Our General sponsor already as a tradition is Societe Generalе Expressbank. They have been our primary partner and general sponsor for 10 years now, and we do believe that together we succeed to contribute for the development of the image of Bulgaria throughout the world”.

“Our successfully implemented jubilee gives me grounds as Chairman of the “International Ballet Competition – Varna” Foundation to have optimistic expectations for the future years – shared Dimitar Dimitrov. Yes, the Varna Competition is the first in the world professional ballet competition, and it has preserved its traditions with dignity. But as we all saw in the competition nights, it is also a forum that, with the efforts of the whole ballet community, develops in the right direction and keeps discovering ballet dancers that are to define the path of contemporary ballet art. Varna has never stopped creating stars”.

Professor Vladimir Vasiliev, Chairman of the Jury, underlined that each year makes it harder for the participants to shine in the starry sky of ballet because ballet develops and becomes more complex, there is ample information, the achievements of everyone are there for the whole ballet world to see. He admitted that the Jury had difficulties due to the very close good ratings of the prominent participants and inferred, “This abundance of good achievements makes me think that classical ballet will not die, it will be forever alive as long as we live, and as long as good schools exist to prepare the young artists”.

It was the member of the Board of the “International Ballet Competition – Varna” Foundation, Ilia Raev who announced the prizes of this year’s edition:

GROUP “A” – WOMEN AND MEN CATEGORIES

“The Grand Prix of the City of Varna” – Gold Medal and Diploma was not awarded.

First Prize and Gold Medal was not awarded in either Women or Men categories.

GROUP “B” – GIRLS AND BOYS CATEGORIES

The Special Distinction Varna 2014 – Diploma and Medal, and a Laureate Title was awarded to Soo-Bin Lee, Korea.

A Special “Emil Dimitrov” Award for Young Talents was bestowed to Soo-Bin Lee, Korea. Two awards – to dance a central part in a spectacle of the Sofia National Opera and Ballet in the 2014/2015 season were awarded to Soo-Bin Lee, Korea and Hugo Marchand, France. The Award of the “Nina Kiradzhieva” Fund for artistry of the Bulgarian participant with the highest rating in the Third Round went to Venera Hristova. Two awards were given by Silvia Co. – Japan – for promising young dancers in Group “B” from the Girls and Boys categories who took part in the Third Round – one for a girl – Seo-Hoo Yun, Korea, and one for a boy – Yu Shi, China.

Incentive awards for performance of participants in the Third Round – to competitors who did not receive prizes or distinctions – an incentive award for achievement of a ballet pair in Group “A” Men and Women categories, and a Diploma were awarded to Venera Hristova, Bulgaria and Doichin Dochev, Bulgaria. Such an incentive award was not given in the Girls – Boys categories. An incentive award for partnership and Diplomas went to Min Kyu Kim (partner of Hee-Sun Kim), Korea, and to Ivan Oskorbin, Russia. Incentive awards for youngest competitors, a boy and a girl, having danced in the Third Round, and Diplomas received Seo Hoo Jun Korea, and Joon Hyuk Jun, Korea. Incentives for competitors having participated in the Third Round but not awarded a prize or a distinction received Jee Un Nam Korea; May Matsuo, Japan; Min Woo Kang, Korea; Yoshiaki Nakano, Japan; Svetlana Svinko, Russia; Oleg Rogachev, Russia; SuJi Gi, Korea.

All competitors who participated in the Third Round of the Competition, but were not awarded prizes or distinctions, received a Finalist Diploma.

In their comments, the members of the Jury noted the high level of the Competition, and encouraged the competitors who were not awarded prizes not to give up but rather to prepare for the next competition in Varna in 2016. Asked why there were not awarded any gold medals, Professor Vasiliev answered that this was a matter of a bit more skills, artistry, and talent, as well as of course of a lot and a lot of work, and he underscored that it greatly depended on the school where the young artist studied.

Jury member Maximiliano Guerra addressed teachers and dancers with the words, “Many can perform complex pirouettes and high jumps. Yet, there is something more important, the soul. Very few people can make one cry or laugh. These are the worthiest people, and precisely such performers do we need. I was 18 when Professor Vasiliev told me, “Visit museums, read books, study the background of the characters, in this way they will become part of you, and you will be able to dance with all your heart”.

Jury member Cyril Atanassoff congratulated all participants, not just the winners, and wished them to develop the potential they have. Professor Sun-Hee Kim, who was also a member of the Jury, spoke with gratitude of the Varna Competition, and noted that without it the development of ballet in Korea in recent years would not have been the same. “I love Varna!” she said emotionally in the end in Bulgarian. Professor Petar Lukanov, Deputy Chairman of the Jury once again emphasized the high level of the Competition, and underscored the opinion of ballet experts that the competition was always on the rise with a very high average level of its participants. Jury member Tursinbek Nurkalliyev declared, “This is a competition that defines the level of world ballet”, and promised there to be a felt presence from Kazakhstan in the next edition of the Competition.

Sonia Dimitrova, member of the MB of the “International Ballet Competition – Varna” Foundation, introduced also the stars that will join in the “Where Generations Meet” Super Gala Concert on 30 July that is dedicated to Maestro Emil Dimitrov: Whitney Jensen from the USA, Maximiliano Guerra from Argentina, Rolando Sarabia from Cuba, Alexander Alexandrov and Nataly Bratanova from Bulgaria, Аександър Александров и Натали Братанова от България, Mathias Dingman from the USA, Brooklyn Mack from the USA, Denis Cherevichko from Austria, Min Jung Kim, Sung Y Han and Meyung Kyu Kim from Korea.

The fans of dance are still to experience the two most beautiful nights in the Summer Theatre when the world will be ballet and its capital will be Varna – the official Closing and the Gala Concert on the 29 July, and the Super Gala Concert on 30 July.

We use cookies and other tracking technologies to improve your browsing experience on our site, sometimes show personalized content, analyze site traffic, and understand where our audience is coming from. By choosing I Accept below, you consent to our use of cookies and other tracking technologies. To find out more or to opt-out, please read our Privacy Policy